Is There a Future for TV Advertising?

Jennifer Bryars About The Author 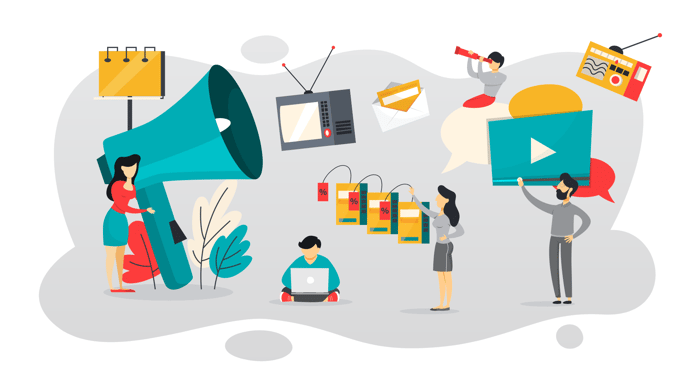 TV advertising dates back as far as the early 1940s. It brought immense success to millions of brands over the years and created many meaningful consumer/brand connections. With the emergence of OTT and digital marketing, however, many companies have begun to question the future of TV advertising.

So, is there a future for TV advertising? Yes, broadcast TV does still work.

Don't just take our word for it, though. Check out these 10 facts about TV advertising that highlight the benefits of advertising on TV and why you should get started.

2. 83% of consumers cite TV as the most trusted advertising medium. (Business Insider)

Trust is one of, if not the, most important qualities for a brand to have when communicating with audiences. In fact, 81% of consumers said they only purchase from brands they trust. Airing your message on TV gives your brand the associated trust it needs to connect with the right people.

3. TV is the most common channel for ad consumption. (Business Insider)

Not only do most people (94%) consume ads on TV, but digital falls into a close second at 82%. This study says a lot about the potential of advertising on TV, especially since viewers tune in expecting ads. Combine TV with digital, and you have a BIG reason to include both in your marketing mix.

4. Studies reveal that Americans spend most of their time sleeping and watching TV! (U.S. News)

According to a recent study, Americans spend most of their time sleeping. However, TV hits second, with viewers averaging 3.1 hours a day. This made TV at the top of the list of leisurely activities that occupied people's time.

The biggest reason so many brands think TV is 'dead' is because of the emergence of over-the-top (OTT). Considering most viewers have both pay-TV and OTT, research suggests you'll maximize your potential by combining the two channels rather than dropping one for the other.

6. Another study found that 21% of consumers are exclusive pay-TV consumers. (Marketing Charts)

This figure may not sound too impressive on its own, but it certainly suggests that there is still a substantial portion of viewers to reach with TV advertising. Combined with another study's high percentage of viewers with both pay-TV and OTT, it's easy to assume that TV still has a bright future.

7. TV has something for everyone, so as long as you know your audience, you can reach them!

You can not only reach all age groups on broadcast TV but reach the right group of people as long as you know what they like to watch. Target your audience on TV with your insight into when they prefer to watch TV, what they prefer watching, and the content they prefer to consume (humorous, emotional, etc.). Consumer research on your target audience is always important!

Videos have become modern-day consumers' favorite way to consume content. The insight that 90% of the average viewers' time is on TV suggests that one of the best ways to reach your audience with video is on TV.

The fact that a TV ad can make such an impression on viewers, especially one that convinces them to make such a big behavioral change, indicates just how powerful TV is. The gum company convinced its audience to consume double their product. A brand couldn't ask for a more successful campaign than that.

10. Most (88%) Americans are on a second device while watching TV. (ARS Technica)

You may think that having a second device in hand while watching TV means you don't have your audience's attention. That isn't true. It actually means you have the unique opportunity to reach your audience with TV and retarget them on their mobile devices. This study also noted that 71% of those viewers also look up content relevant to the content they're watching. Craft a message with your TV ad that encourages your brand to be the content they look up!

Why Your Business Should Be Advertising on Broadcast TV

Simply put, your business should be advertising on broadcast TV because it still achieves results. Just because other marketing opportunities have emerged over the decades, doesn't mean TV is dead. It means brands have a unique opportunity to use a combination of marketing channels to identify and connect with the right audience. So, yes, TV advertising is here to stay.

When you're working with an experienced media company, you're able to not only produce high-quality commercials for broadcast TV, but you're also able to have their guidance from the beginning stages to measuring and analyzing the results.